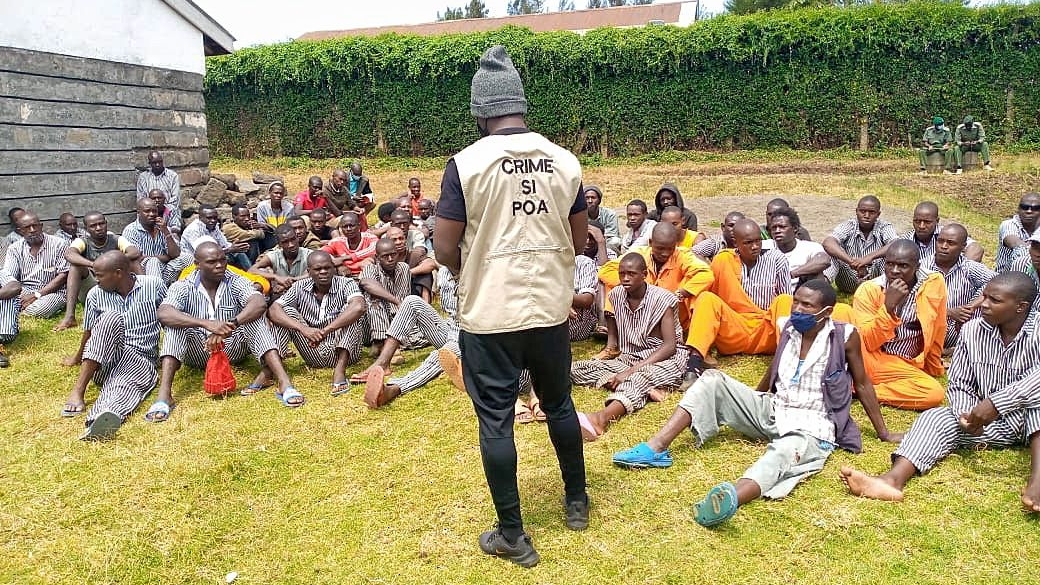 In the last 2-months Crime Si Poa (CSP) has expanded its psychoeducation services to eight (8) prisons in Nakuru, Kisumu, and Nairobi cities in Kenya. This is an intervention to mental health disorders and recidivism among incarcerated youth in the country.

The services initiated under the Phoenix Programme not only enable the organization to meet the need for psycho- support in Kenyan prisons but also help promote the overall wellness of inmates and equip them with profitable skills that will make them self-sustainable, subsequently helping ease their reintegration process.

According to Flavier Mwika, CSP Phoenix Programme Officer, the prison outreach program has been received with much excitement from both inmates and the prison officers who look forward to the upcoming mentorship sessions.

“Initially I thought there would be little interest in our activities, especially among prison wardens. To my surprise, the community gave us a great reception and they have been so supportive to the program,” said Flavier, adding “Due to the impact created among inmates through psychoeducation services, officers have also requested for social support service since they are also facing issues related to mental health due to their nature of work.”

“We have partnered with psychologists who have agreed to volunteer in conducting sessions to create awareness on the importance of nurturing a healthy mental state. The program has also involved churches in the three cities willing to offer spiritual services to the inmates,” confirmed Flavier.

Inmates have shown a positive attitude toward the activities. They have expressed interest in having counseling services. They have also trained other inmates who do not get a chance to participate in these activities.

Paul Kibisu, one of the inmates at Kisumu Maximum Prison, is a jubilant person who has largely benefited from the program especially the social enterprise aspect of it through learning skills on bead making and soap making.

“Inmates are just like any other person; we are not enemies. CSP should engage us in more activities that will prevent us from relapsing and going back to crime again. Someone regarded to be evil or bad can change and be of great impact on society. Some of us are prisoners due to crimes we committed out of peer pressure, bad influence, poor background, and lack of guidance,” said Kibisu.

In the sessions held so far, the CSP team has noted that the majority of prisons in Kenya lack guidance and counseling departments. The few prisons that do have these departments, don’t have the capacity to make them active.

“Mental health continues to be an emerging issue in Kenya, especially among inmates, who are extremely vulnerable. The lack of psycho support in the prisons, increases the gravity of the issue, with cases of suicide, depression, anxiety, and post-traumatic stress disorder on the rise hence the reason why we saw the need to expand this program,” concluded Flavier.