The sewing machine is purring as another order for a customer is being put together. It is only two years since James Macharia walked out of prison after serving a 15-year sentence, and though the transition from prison life and back into the community was tough, James has put all that behind him and is gainfully putting to practice the sewing skills acquired while incarcerated.

Even though there is a presumption that sentences served are commensurate with the offence one is convicted of, and the Kenya Prisons Service prides itself as a correctional service of excellence in Africa and beyond, the reality is that Macharia, just like many other returning citizens (ex-inmates), find it difficult to get jobs or even finances to start business upon release to due to the much dreaded “certificate of good conduct”  from the Directorate of Criminal Investigations (DCI).

“After serving many years in prison, I faced a lot of challenges including stigma when I was released. The hardest part was getting a job or even money to start a business with the skills I had acquired. I knocked on various office doors with hopes of getting assisted to acquire an electronic sewing machine in vain. In most cases all I got was empty promises,” reckons Macharia.

According to Macharia, days quickly turned to weeks, weeks turned to months and months to a year, without securing any financial help to start a business to sustain his livelihood. He had whoever vowed and determined to not give up or allow himself to relapse into crime as an alternative to earn a living.

“I almost lost hope, but when I remembered how far I had come from my former life in crime, I decided to push harder. Sometimes you feel like doing the unthinkable, but you realize that crime doesn’t pay. I choose to approach Crime Si Poa, an organization that was founded in prison and which is now creating change in the society. This was a game changer and a beacon of hope to me,” said Macharia adding “To date, I remain grateful for the financial help I got from the organization.”

Crime Si Poa through its empowerment initiative program granted James Macharia, financial assistance to purchase an electronic sewing machine that quickly helped him realize his dream of becoming an entrepreneur.

Born and raised in Nairobi, Macharia was able to quickly identify a niche for a proper location for his business and establish a customer base. His decision to start his business in the busy Jua Kali area of Ngara, aided him to tap into the thriving matatu industry.

“I have skills in sewing attained while in prison. When I got out of prison, I didn’t want to waste the skills. I am happy that today I have a customer base around Ngara area in Nairobi. Most of the cool seat covers in Matatus are made by me. This makes me feel satisfied,’’ Macharia said.

Through partnership with The Answer Foundation, a Dutch based Christian organization that focus on holistically empowering inmates and ex-inmates through spiritual, pyscho-social and employability skills, returning citizens like Macharia, have secured a second chance in life, and are now also offering job opportunities to other Kenyans. This not only helps reduce recidivism but also leads to reduced crime rates in society.

Other than sewing and upholstery, the multi -skilled Macharia is also NITA certified mechanic, carpenter, and welder. “I am requesting those who have got jobs, to bring to me as I am qualified while my charges are pocket friendly,” concluded Macharia.

Crime Si Poa has always been on the front line of empowering returning citizens, to ease their reintegration into society.

James is proof of resilience, audacity, and focus. A model citizen worth supporting. You may call our office number 0741506060 if you want to place orders to, or support James.

Impact is what motivates us all. You do not want to engage in a project that does not create any impact. Crime Si Poa (CSP), through the Social Enterprise Project, has engaged over 200 people in Ongat Rongai, Kajiado County, in various skills that have improved their livelihood. This has consequently, helped them avoid being involved in crime.

In Ongata Rongai there has been a spate of criminal attacks mostly committed by the youth necessitating an urgent intervention measure to curb the escalation of crime. CSP through the Rongai hub for the last one month has been training in the youth in the art of soap making.

Fridah Njeri is one of the beneficiaries who have benefited from the soap-making skills attained and have since commercialized to make a living from it. From the proceeds made so far coupled with her other savings, she has managed to open a retail shop located in Rongai at Boone house Gataka Rd.

“I was inspired by Crime Si Poa facilitators to get into social enterprise. The skills we learnt through extensive training on the art soap making are already impacting us and changing our status in the community,” said Fridah.

Njeri was not only taken through the art of soap making but also equipped with the relevant business skills. These skills will see her and fellow youth break through the highly competitive market.

“Thousand tongues are not enough to appreciate Crime Si Poa for equipping me with the skills that I have commercialized now. I hope to grow this business to greater heights and create more opportunities for others,” added Njeri.

Halima Guyo, Crime Si Poa, Program Officer, Ongata Rongai Hub, expressed her satisfaction in seeing one of the people she trained maximizing on the skills she taught them.

“I am happy seeing Fridah work out of poverty because of the skills we equipped her with. She is now an owner of a business. Many are also motivated by this, and we hope to see more venture into social enterprise rather than engage in crime,” said Guyo.

Living in a world where employability is not ascertained, a world shrouded with changing dynamics, it is important to update your skill set so that you remain competitive in the job market and business landscape.

20 youth beneficiaries in Rongai, Kajiado County have graduated with digital livelihood skills after a three-months training by Crime Si Poa. The ICT training was conducted in a bid to engage youth with innovative skills, consequently, curbing high crime rates in the area.

This is the second cohort that has successfully been equipped with relevant computer skills through the Digital Livelihood Project under the large umbrella of the Social Enterprise Program. Through the project, the youth have had an opportunity to acquire relevant techniques that will succour them in their daily lives.

“We greatly appreciate Crime Si Poa for this initiative, our children have not wandered away in crime and drug abuse, because they were engaged by this program, may God bless you Crime Si Poa,” said Leah, a parent of one of the graduates.

AJIRA Digital Coordinating Officer, Antony Chege, made outstanding remarks encouraging the youth to soldier on the path to acquire more knowledge on digital skills and possibly venture into online work.

“Do not settle at this, keep pushing to acquire more. Currently, almost everything is digitized, you, therefore, need these skills at your figure tips in order to have an upper hand,” said Chege, adding, “There are many legalized profit-making platforms available online, it will do you good to join such platforms and earn your own money with the skills that you have.”

Beyond this, the program seeks to engage young people to reduce the high rate of idleness in the community which redounds to an opportunity of engaging in crime and criminal activities.

According to Phanice Kimutai, Digital Livelihood Project Officer, Crime Si Poa’s greatest motivation is to reach the entire community with the anticrime message. Apart from preparing the youth for a technical world, the organization also empowers young people to be heralds of the anticrime message.

“After this auspicious graduation, sell the anti-crime message far and wide, let people see its breadth and length, let them feel its depth and its height to the end that our community becomes crime-free,” concluded Phanice. 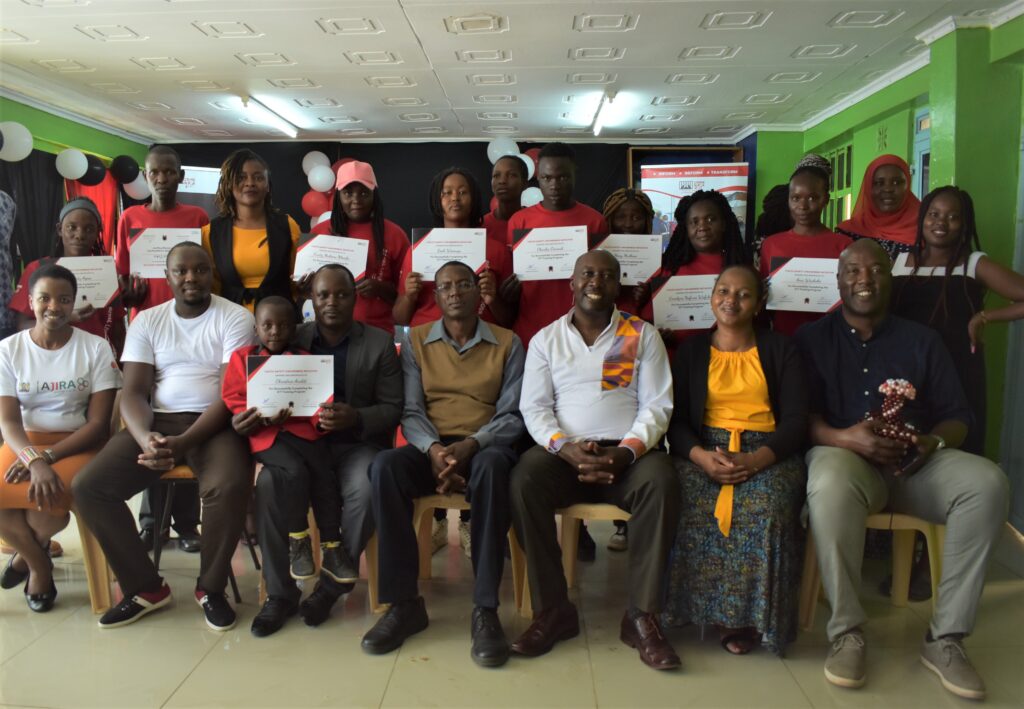 Over 20 community members have been awarded certificates after completing a two-month ICT training in Rongai, Kajiado County. The group composed of youth and women was trained under our Digital Livelihood Project which aims at bridging the digital divide, providing new ICT skills & empowering young people to avert crime.

The project comes at a time when crime rates and substance abuse by young people in Kajiado County and especially in Rongai have been on an increase, bringing the attention of community members and Crime Si Poa (CSP) to intervene.

According to Patrick Wakaba area Sub-Chief, the skills taught under the project will help young people get opportunities hence reducing crime in the area.

“We must deter young people, especially the boys from crime through offering skills-based training. As local leaders, we are willing to work with Crime Si Poa and the community at large to help reduce vices. I urge young people graduating today to become Crime Si Poa Ambassadors,” said Wakaba.

Ward Administrator- Oganta Rongai, Samuel Muchiri, urged the youth to stay focused and utilize various skills being imparted to them to benefit their community. He further called on them to network with people who can assist them get variable opportunities.

“Every young person carries a gene of greatness: never belittle yourself. Work towards bringing out the best in you.  Never give up. Opportunities will only get people who are ready just like you,” Muchiri advised.

His counterpart, Wilfred Obasa Ombogo, speaking during the awarding of certificates, called for civic education, devolution, Sacco forming, and networking with people.

“CEOs are made from such training as under the Digital Livelihood Project. One can start an NGO such as Crime Si Poa. At this stage you are in and the skills gained, you stand becoming better people,” said Ombogo.

Wendy Orengo, a software Engineer from Akira Chix and an alumnus of the Crime Si Poa, Digital Livelihood Project, emphasized on the need to expand the program to benefit a large number of youths.

“I am from Dandora Slums. CSP was my stepping stone. The training I did in the first cohort in 2019 impacted my life positively. As long as you have self-discipline you can achieve whatever you want. You are not defined by where you come from, said Wendy adding “I Volunteer to train on software design and coding and walk with you on the journey of getting a job.

Jackline Seleiyan, a Center Manager with the Ajira Digital Program, urged the youth to use digital skills to not only earn a living but also impact their community by writing blogs that will create awareness of crime-related issues.

‘Strategically position yourself in the digital sphere you will get opportunities. As we go to the election we should use the digital space to spread peace messages, especially as women since we suffer most from violence. Politics should be done peacefully. We must accept defeat when a leader of choice loses,” concluded Seleiyan.