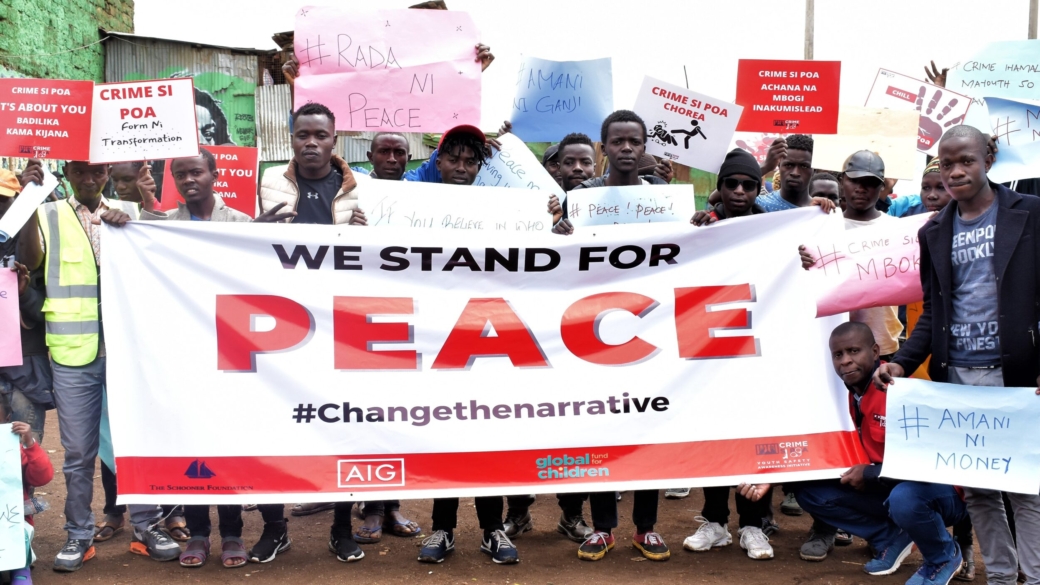 Youth in Mathare held a Crime and Peace Awareness Campaign Walk to advocate for peace in the area. The campaign, an initiative by Crime Si Poa in partnership with Footprints for Change and Generation Shapers, was in a bid to address the high crime rate in the region.
“Mathare has for a long time been marked as a high-risk area community with cases of theft and robbery with violence on the rise. Young people between the age of 16 to 25 in are being recruited into gangs wreaking havoc in the,” said Ruth Wambui, Crime Si Poa, Community Engagement Officer, adding. “There is therefore need to take action and build cohesion within the community to cultivate peace in the area.”
“Last year a good number of my friends were killed due to crime,” shared Benard a high school student in Mathare who took part in the Peace and Crime awareness campaign. “Crime has hindered many of my friends from achieving their dreams. Majority of them end up using drugs and later engaging in crime. It is time we put a stop to this,” he added.

According to David Lichuma a member of the generation shapers, youth should stand for peace and desire to see a change in Mathare. This was a shared sentiment among many youth members who were at the forefront of the campaign.

“As youth we are saying enough is enough. We must have peace in our hood. We have lost so many of our friends to crime. We don’t want to lose more,” said Lichuma.
The message of peace resonated with majority of the community members, inspiring some to come forward and speak up against crime. Most of the community members called for peace to allow businesses within the area to flourish.
“You don’t have to be a criminal just because you were born in Mathare, there is hope of making a better life for yourself. I was once a criminal, but I reformed, you can also choose to lead a crime-free life,” said Pastor Philip a known community member who encouraged the youth to change their mindsets.

Assistant Chief Mabatini Ward Mugu Njogu, was happy and encouraged to see the youth come together to advocate for peace. He appreciated Crime Si Poa and the partners for coming up with the campaign initiative.

“This peace walk has come at the right time. We urged everyone both the women and men in the community to join the young people in advocating for peace in Mathare,” he concluded.