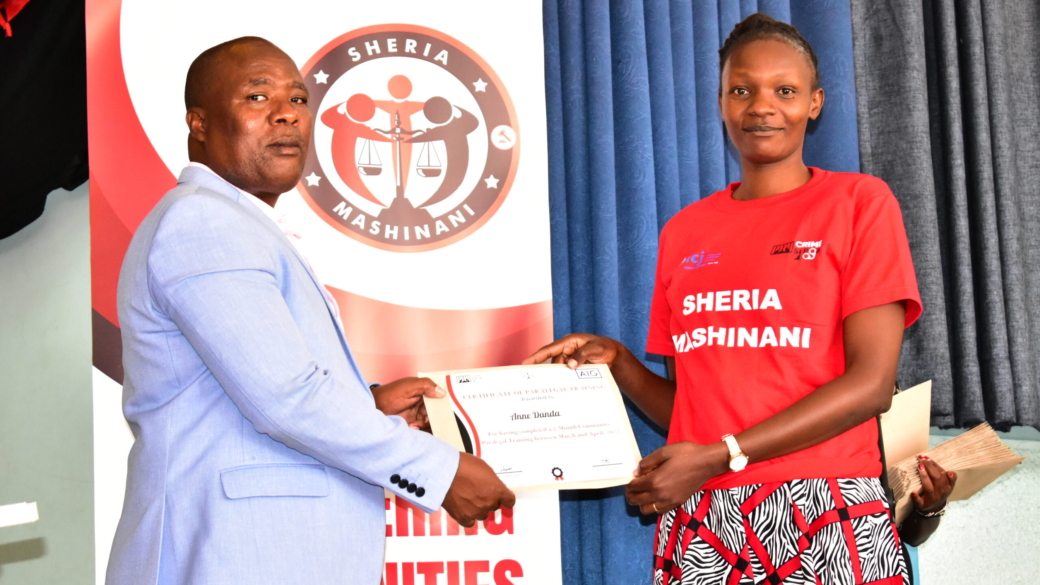 Over 65 community paralegals in Kisumu and Vihiga counties have been awarded certificates after successfully completing a three-week paralegal training that has empowered them with legal skills to promote access to justice in their respective communities.

Under the Access to Justice program, the sheria mashinani project is aimed at bridging the legal gap existing among the underserved communities due to poverty and ignorance of the law.

Speaking during the event held on Thursday, August 4, 2022, at Mama Grace Social hall in Kisumu, Sylvia Morwabe, Programs Manager, Access to Justice said a  lot of people in the communities get in trouble because they have little knowledge of the law.

“The purpose of this training is to impact and empower community members especially the youth with legal skills and knowledge to increase access to justice.  The community paralegals will help the community better understand what the law entails and guide them on how to demand for better services and get help in times of crisis,”  explained Sylvia.

According to Hon. Justice Joel Ngugi, only 21 percent of Kenyans have access to the courts as a primary source of justice. He urged the group of paralegals to demystify the idea that justice can only be found in the courts and work to reactivate the exciting community justice systems to ensure easy access to justice.

“As we celebrate this milestone I call upon this team to be missionaries of justice  to ensure that justice can be accessed by all,” urged Hon. Justice Ngugi.

Crime Si Poa Chairperson, Wilfred Nderitu, accentuated the importance of conducting the training in underserved communities by pointing out the existing gaps and the role the team will play in addressing them.

“You are coming in to bridge a gap that has been there due to ignorance, poverty and bureaucracy by assisting those who don’t know their legal rights or lack access to a lawyer to attain justice,” He said.

County Criminal Investigation Officer (CCIO) Francis Wanjua urged paralegals to play the role of being a community guardian by utilizing the knowledge learned to guide those around them to stand for their rights. Stating that a trained society is easy to deal with.

“ We appreciated the work Crime Si Poa is doing in empowering young people to act as peer counsellors and reaching out to fellow youth who are the most affected by crime. I urged the youth to be ambassadors of peace in the coming election week,” said Njau.

Within just a few months the impact of the training has already manifested itself with the majority of the paralegals attesting to the role they have played in aiding community members access justice. Isaiah Munyala, one of the graduates, described how he has helped educate and advise different community members on arising issues, noting that the majority of his community is ignorant of the law.

“ So far, we have been able to advise on at least three different cases, one of which was successful. We can attribute this to the intensive training we have received from Crime Si Poa team,” he said proudly.

Michael Bala, another graduate, could not hold his excitement as he explained the positive influence the training has had.

“Before the training, I did not know the legal procedures to follow when dealing with child neglect and SGBV cases which are recurrent in my community.  Since the training I have been able to assist in multiple cases that have helped many families get justice,’ he expressed,