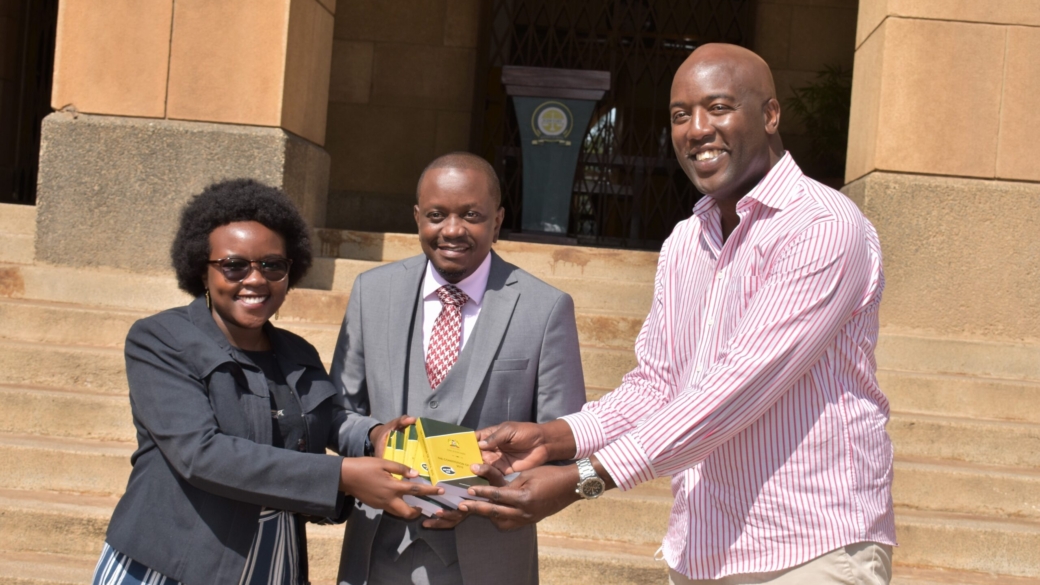 The Judiciary of Kenya has donated hundred (100) copies of the Constitution of Kenya to the Crime Si Poa (CSP), Access to Justice Programme. The donation to support the ongoing training of 80 paralegals from Kisumu and Vihiga counties. The support will enhance the legal knowledge of the youth to serve their communities effectively.

While receiving the donation from the Judiciary, CSP Executive Director, Pete Ouko termed the support, timely and a good gesture towards improving access to justice at the grassroots level under the Sheria Mashinani project.

“CSP appreciates the judiciary’s transformative policy of promoting access to justice for the common mwananchi.  We appreciated the support the judiciary has continuously offered the organization during our regular community dialogue forums in different parts of the country,” Said Pete.

“The Judiciary appreciated the work Crime Si Poa is doing in the country. We call upon the organization to always reach out to the judiciary for partnerships that enhance access to justice for all,” said Mumo.

Mumo further said the Chief Justice is keen on ensuring the role of the judiciary to empower citizens and vulnerable groups such as children, persons living with disabilities, the youth, minorities and marginalized groups and elderly members of the society through access to justice.

According to Pete, the judiciary has been supportive of the organization through community dialogues and paralegal training of the young members of the community.

“CSP would like to express its sincere gratitude to Hon. Justice Isaac Lenaola, Judge of the Supreme Court of Kenya, initiated the process that led to today’s event. We would further like to appreciate the support of the Kisumu High Court led by Hon. Justice Fred Ochieng and Deputy Court Registrar, Hon. Lina Akoth for graciously attending and motivating the paralegals during their ongoing training,” concluded Pete.