Early this year I embarked on a journey to complete mandatory hours required by the school. This was to attain grades enough to secure a slot on the covet graduation lists. What seemingly began as an unfamiliar journey for a mere student ended up as a life-changing sequence of events.

My first visit to the famous Sarakasi Dome, renowned for producing and nurturing multifaceted talents in Kenya and hosting artivism events, was exciting as well as confusing for a fourth-year student who happens to come from a protective family and is less exposed to the outer world.   After pouncing onto the stage amidst a performance, I finally got someone to show me the way to the Youth Safety Awareness Initiative, popularly known by its original Swahili name, Crime Si Poa (CSP) office. This was the beginning of an exciting experience, I would never trade for anything.

I had heard little about the organization but nothing came across my thoughts that my first opportunity to do community service would be in a prison. Yes, A prison, you can place an emoji of your choice to express the fear and worries I had at the start of it. I had definitely heard about Kamiti Prison, but it sounded like a faraway land full of incarcerated people deemed evil by society. Never in my wildest thought had I associated anything good with Kamiti Prison. Today, I am grateful that a lot of that has been demystified and my perception changed.

On my first visit to Kamiti Prison, I was so excited that I couldn’t keep calm about it. Literally, everyone in the house knew about it and supported it of course with a shiver of fear coupled with the uncertainty of what I may encounter during my visit to one of the toughest prisons in Africa. A quick piece of advice given to me by my mother was on the dress code. She recommended somber color wear. Looking back, one can tell a lot of the notion we hold against prisons in Kenya.

Seeing people of my age and younger confined and others remanded in prison, was a heart wrecking experience and a turning point. This really changed my perspective about prisons and my general view of life in Kenya. At a flip of a second one could find themselves behind bars whether rightfully or wrongfully convicted.

This got me to break free from my protected bubble of living and seeing reality from a different spectrum. My then narrow thinking was that the justice system was all about the police. However, with my experience working in the Justice and Awareness Program, under CSP, I have come to learn that the justice system is a web consisting of many players that include lawyers, magistrates, complainants, paralegals, law enforcement officers among other stakeholders.

With the work CSP is implementing in prisons to support incarcerated young people, advocate for legal reforms, and work to reduce recidivism, I totally appreciate paralegals and nonprofit organizations’ noblest role in the justice process.

I have never realized how blessed and privileged I am, until some weeks ago, when some cases were reported to us, the Access to Justice team. The cases involved heinous actions by individuals who were defiling children in exchange for food and other basic needs such as sanitary towels. Parents expose their children to harm and express nothing but pure hatred and neglect to them. To say that these unlawful acts broke my heart is an understatement… A lot has to be done.

My naïve thoughts were that to make a difference one needed to have a lot of money and influence. With time, I have come to learn that changing the world and making an impact is not all about money. It’s being passionate about a course and willing to make an impact on even that one life. This goes a long way to change the world eventually. It is a better alternative to be there for young convicts, mentor them, visit them, listen to them, give them a second chance; than to condemn them and shun them.

Crime Si Poa has started a fire within me that I do not think will burn out soon. 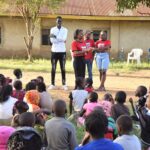 A STORY OF TRIUMPH AMIDST A PANDEMIC AND CHARITY WORK

Criminals continually find creative ways to target their victims that we aim to unveil.

Listen in as Teddy narrates his experience of how he was robbed, revealing a new strategy used by criminals on the main #Nairobi main highways.

Listen in to get tips on how you can keep safe