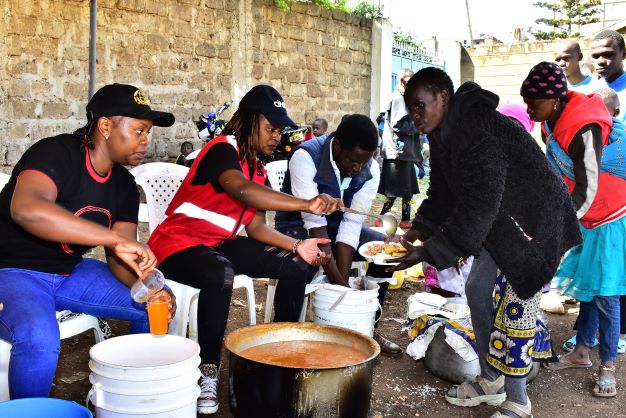 Sharing a meal is a global language, and it is in the spirit of the festive season that Crime Si Poa (CSP) staff, as part of their day of service, partnered with the Street Changers CBO to hold a colorful event for more than 500 children and persons living in the streets of Nairobi.

During the sports, mentorship and food festival held at the PCEA grounds in Eastleigh, Nairobi on Friday, street children and families from Eastleigh, Huruma and Mathare areas of Nairobi were fed sumptuous meals and given clothes as the Christmas festive season sets in.

Speaking at the function, Crime Si Poa Programs Coordinator, Ms Irene Were reiterated the importance of the exchange and learning platform and what it means to persons living on the fringes in society.

“Crime Si Poa runs a street children project in Nairobi, Nakuru and Kisumu cities respectively which involves elements of psychoeducation to address the mental wellness of the beneficiaries, soft skills mentorship and life skills training. This has led to successful re-integration of some of the beneficiaries to their families,” said Ms. Were

Ms .Were reiterated that as an organization that works with street families, Crime Si Poa believes that such events show true love while at the same time encouraging acceptance and inclusion of the street families. This in turn reduces crime rates and makes our cities and neighborhoods safer.

Mercy Murithi, the Coordinator of the Street Changers CBO acknowledged the enormous talent harbored among members of the street families that needs to be explored. ‘‘The amazing football game witnessed here today can be harnessed to elevate the lives of street kids, rehabilitate them, and help to ease the reintegration process with their families,” she said.

Representing the government, Eastleigh area Chief, Edwin Muchere noted that hard economic times have driven many vulnerable children to the streets. He requested more organizations and community members to show empathy to street families emphasizing that we should all enjoy equal human rights.

“We can make the world a better place when we all care for one another regardless of our status in the community. I usually request security people guarding different shops in Eastleigh not to harass children and instead treat them as fellow human beings,” Muchere stated, adding “It is not their choice to be in the streets we should exercise humanity, the fact that they have torn clothes does not brand them thugs to warrant beatings.”

CSP thanks our sponsors the Schooner Foundation for their great support in changing the lives of the underserved in the community.