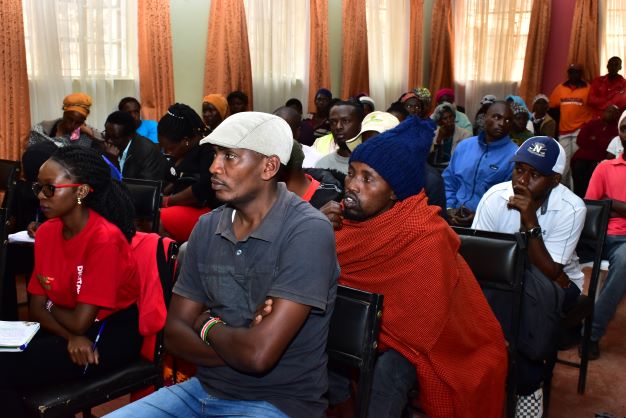 In Kajiado County Female Genital Mutilation, (FGM) is prevalent and forced on young girls despite being illegal in Kenya. The harmful cultural practice has largely affected school-going girls. Most teenage girls drop out of school and engage in early marriage, after undergoing FGM. Crime Si Poa (CSP) in partnership with Kwetu ni Loitokot community-based organizations (CBO) are trying to end this vice that is deeply rooted in Masaai culture.
Speaking during a forum held in Loitoktok by Crime Si Poa (CSP) and Kwetu ni Loitoktok CBO, last week to facilitate constructive debate on how to eliminate FGM and Sexual Gender Based Violence (SGBV) in Kajiado, Patrick Bure, Assistant County Commissioner urged community members to drop harmful cultural practices such as FGM and gender-based violence that are retrogressive to the growth and development of the Community.
“As a community, we must come together, join hands with other activists and support the government’s drive to end cases of female genital mutilation in Kenya. We need also to have equal rights for all to ensure everyone lives a dignified life,” said Patrick.
In Kajiado County, FGM was perpetuated by the misguided belief that it instilled good morals and discouraged promiscuity in young girls. A belief that has been termed misleading and not backed by any scientific research.
“FGM and gender-based violence do occur because they are culturally supported in this community. A woman is treated like a child. There is a bad perception that a woman can be corrected when she does something wrong, by punishment. This is unacceptable and against human rights,” said Rafael, a member of the community.
The practice of FGM is illegal in Kenya, with the government pledging to eradicate it by the end of 2022, eight years ahead of the global deadline of 2030.

According to Moses Orundu, Sub-County Health Commissioner, FGM has largely contributed to Gender-Based Violence with one gender perceived to be lesser than the other. However domestic violence among families has also been fueled by drugs and substance abuse, especially among male counterparts.

“In this area, there is high usage of marijuana and consumption of alcohol. This has resulted in misunderstandings among family members, which end up being violent. The high cost of leaving has also pushed community members to engage in crude ways of earning a living. We need urgent intervention,” Lamented Orundu

Crime Si Poa and Kwetu Ni Loitoktok after the event met with Shadrack Ruto, OCPD, Kajiado South Police Division, and engaged in ways to protect young girls and women from vices such as FGM and SGBV.

“Unfortunately many locals are not willing to cooperate with the police officers including area administrations like the chiefs. It is important to work with you to create the much-needed awareness in this area to eradicate, FGM, SGBV, drug and substance abuse as well as empower our community,” the OCPD concluded.

Crime Si Poa is in the process of extending its hands to partner with other community groups in Kajiado County to sensitize the locals on issues concerning mental health, domestic violence, and FGM.